LG K10 K410 Stock ROM Firmware is now available for download and You can download it below. by using this firmware you can solve all software Issues within your LG K10 K410 such as hang-on Logo, FRP lock, fastboot Mode, display blank or white after flash, dead recovery, dead after flash, etc.

Download LG K10 K410 latest flash file from gsmdroid.net and flash your phone for removing all screen locks and fix hang on logo problem. always use latest firmware for flash.LG K10 K410 flash tool required login credential to run, if you don’t have then contact me for flash.

After Downloading the firmware, follow the instruction manual shipped with the firmware to flash or install firmware on LG K10 K410. 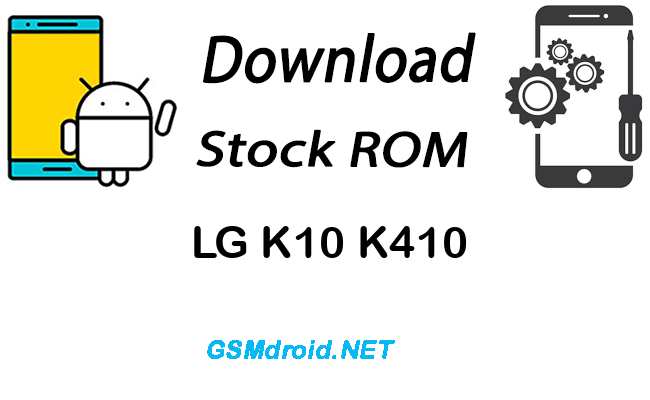 Firmware is an operating system that helps you to navigate through your LG K10 K410. Meanwhile, it includes all the UI/UX with another major functionality. Likely, it has been used to operate your device accomplished with hardware—furthermore, the Firmware for mobile is typically known as Flash ROM that installs on your device memory. A Rom, in this case, is referred to as the firmware of the LG K10 K410 phone. It is nothing but an operating system. Users of the phone can install custom ROMs.

A LG K10 K410 Stock ROM/Firmware is official software that is designed by the LG for a particular device. A Truly Stock ROM is one type that does not undergo any cosmetic/functional changes in the code by the hardware manufacturer. The “stock ROM” comes installed on the phone or tablet at the time of buying, given by the device manufacturer. Stock Rom has one that doesn’t undergo any modifications that are done in a custom ROM.

What Problem Will Be Solved By LG K10 K410 Firmware?

On LG K10 K410, you can go to Settings> About Device> Build Number in the settings section to view the build number and device.

The officialLG K10 K410 firmware does not have any manipulation and there are no problems with stopping various processes and services in this firmware. If there is an update, you will be able to receive updates from within your ROM, which you can update without losing your data.

Yes. The LG K10 K410 Stock Firmware (Flash File) is 100% safe for the Computer, laptop, and LG device. Furthermore, since the LG mobile community officially releases the driver, it’s 100% safe & secure to use on the Computer.

[@] Backup: If you are going to flash or install the above firmware on your LG K10 K410, then we recommend taking a backup of your data, as flashing or installing the Stock ROM (Firmware) will wipe the data from the device.

From LG you can download the firmware ROM of all the latest models of the LG device.
Do not use this firmware on any other LG devices. this stock Firmware fit only for your LG K10 K410 device. The ROM file on this page is the official ROM file published by the company:

Hopefully, We believe that you have now able to Download LG K10 K410 Flash File Firmware | Software Update. Thanks for being with us, We would like to know your valuable opinion and feedback if there is any query share with us in the comment section down below. Stay tuned for further updates in the future on the same.